Rudy is finally completed! She won't appear in our next Beta (which will be released in a few days) because she appears later in the game. Oh yes, Dedu will be in the game as well!

Rudy is friends with Ucogi and Dedu. She is Ucogi's rival in many ways but in this adventure she comes along to help. Rudy works as a maid in Mr. Tremmors mansion as a part-time job. She usually makes fun of everything, judging from her own point of view. I suspect Voms will have a hard time dealing with her!

Rudy can roll on the ground and go through enemies and she can also kick enemies in close proximity. She has a special gadget attached to her arm which shoots laser beams for long range attacks. Her gadget allows her to hack doors that other characters cannot open. Also after a few software upgrades, the gadget can project holograms, turning Rudy to MoGi! Furthermore, Rudy will have 3 MoGi morphs. Each morph will give her new skills and help her explore new areas!

Rudy can't reach higher areas to climb and when she climbs she is slow. She can't push objects because like Chibi, she is small in size and not strong enough. Also she won't have a minigame, so no second chances after her lifebar goes to zero. Rudy can already avoid enemies and kill from afar, therefore we had to balance her abilities, otherwise she would be extremely strong. Rudy doesn't have a special uniform like Voms' to protect her and that's our official excuse! :P 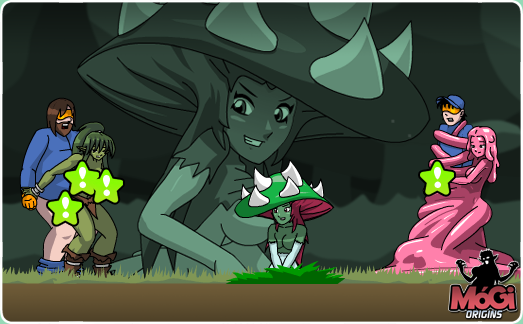 The new Beta is here! We also updated the demo, to match the new Beta's settings.

Our main concern is to see if the game runs smoothly on most computers and without glitches. This is a test of our new game engine, so please test it (especially the animated sex scenes) and let us know if they play without any problems. Please make sure that everything appears in the correct folders!

Looking Ahead:
Veins designed the whole island... so all that's basically left for him to do are the playable characters and rest of the MoGi. We'll most likely touch up some levels to make them more interesting or work better as well. Also, a small peek of RockGirl Stone. She will appear in the next Beta... very soon!

Also! I almost forgot but if this is your first ever Beta update you're probably lost on how to get the newest files.  Well it's pretty easy. Just fish out the link we gave you and download the files from there. It's always the newest files.


This is just a quick public announcement. We've been trying to reach one person for a while now but we can't, and this is the only way I can think of to do it. The e-mail you gave us is an @ymail.com and we can't send emails to it. Please use the blogger contact form with a different email and tell us your name. If you're reading this and you're pretty sure it has nothing to do with you, it probably doesn't.
Posted by TitanAnteus at 6:19 PM 115 comments: