We are in Patreon! Why? Because we want to continue making awesome Hentai games! This is not a Patreon about MoGi Origins, but a support device for Team Erogi and any future games we may make! We are low on funds for a while now and if we get forced to get a job elsewhere... that would delay MoGi Origins even more. It takes a lot of time and effort to complete such a big game and that's why we need your help. But let's be positive about this! The following video is just a glimpse of what we achieved so far and what to expect in the near future!

Patreon Rewards:
We tried to avoid anything that will make us delay the making of MoGi Origins. Most of the rewards are images/animations essential for the game or already completed, and in-game rewards which are easy-peasy to add. Once all the images are given away (it will take a while), they will loop and given again, in the same order. We wanted all Rewards to be... rewarding!

Patreon Stretch Goals in detail: (That's the real game changer... literally!)
• The first goals are adding the two chibi RockGirls. You might not care about them because they won't have sex scenes. But they are easy to do because they are basically clones of Chibi Ucogi, so it's a small early addition.
• Later on we have 4 new Hostage Rapes. They will be decided by Patreon poll. If we reach those goals we will have a total of 11 HR. Then we can have one HR per region, making the exploration element perfectly consistent.
• Then we have the long awaited Nude Alice mode! The story will reveal her mysterious past, and it will answer why she kills anyone who sees her naked! Nude Alice will have a new level (10 areas), including 3 male enemies that can violate her in various ways. This dark mode will be in contrast with the bright theme of MoGi Origins in many levels.
• The next 3 goals are new MoGi that will also be decided by Patreon poll. Originally there was to be 12 Mogi. Then we added 2 extra MoGi, pushing their number to 14. Now we have the opportunity to have 17 (excluding the two chibi Rockgirls). It's gonna be chaos! xD
• Complete Vor sex scenes! This is a huge goal! Vor would be able to have sex not only with the Queens he faces, but also with every MoGi! That's 20 new sex scenes! Vor's sex scenes will make male-dominant and on demand, unlike we have seen so far with Voms! Don't worry, it's not much of a rape if you fuck willing girls. Or is it? We dont know, because they will be decided by Patreon poll!
•  Ucogi and Alice lesbian sex scenes! Ok this is the hugest goal of them all! I know that word doesn't exist but this goal is so out of reach... it's fitting! Ucogi and Alice will be raped by MoGi in 20 different ways that will be decided by Patreon poll! Imagine the possibilities.. even SlimeGirls can grow cocks and fuck them! That's not futa, right? ^^;

Phew, that's quite a list! Nude Alice and Vor/Ucogi/Alice sex scenes are a big risk... if we reach that financial goal we have to keep our promise. That means that if the Patreon income decreases dramatically, we still have to deliver! It's a bet, and for that reason we set those goals a bit high. 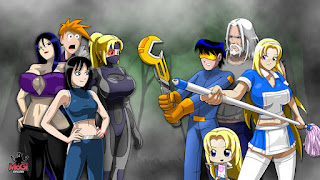 Our thoughts and concerns:
We do realize that these Goals will make the game development longer. On the other hand the sheer content size will make MoGi Origins a must-have H-game! That is if the Memory problem doesnt return... ^^; If that happens we have a plan B (and C) but that chance is slim since GM has fixed many of these issues.

Also, the higher Goals won't delay Voms' game, because we will finish his story before we move on to other characters. It will take a while for Veins to make all this art, sure, but as you've seen in the video, a lot of unseen art is done (such as SlimeGirl's Red and the Soldier animations) so Titan has a lot of ground to catch up. So yeah, while Titan is finishing the game it self, Veins will have the spare time to work on those extra hot animations! ;)

We want to thank everyone that's supported us and pushed us into doing this,
and we want everyone to know that we've thoroughly listened to all of your feedback.