So there are a lot of design decisions we had to make for our game from the onset, and the game's gone through a lot of changes.
I decided to take the time today to explain why we chose to shape our game the way we did, as well as the changes we've decided to make to the game to stay on Patreon.

First, we've changed Hostage scenes to be Map Scenes.
In a game like ours you only get to the main adult content when you're losing. We didn't want it to feel like we're punishing the players for playing the game correctly, and we wanted to inspire more exploration so we thought... How about we add Hostage scenes where you have to go around saving guys from Mogi having sex with them? If you play the game right you still see the content you came to us for. Patreon has a zero-tolerance policy for rape, so we're going to frame that aspect of the game differently. They aren't really being, raped, the guys are choosing to do it, but the girls are a bit overzealous.

From now on all mention of Hostage scenes will be Map Scenes, and the dialogue when talking to them has been changed as well.

Second,  we've specified that the smaller MoGi will not be having any adult scenes. Any longtime followers of the game already knows that we had no intention of giving the younger characters any adult exposure, but it wasn't clear so we made it so.

Just to add some small tidbits of information for you guys to digest, the Map Scenes weren't fully our idea. It was due to you guys.

When we were starting out, we thought we'd stay the course and do what other games generally did, as we saw no apparent flaw in their design decisions, but through constant communication with you guys multiple things changed in our game. Through playing the game, we remember some of our players lamenting the fact that they had gotten better at the game. We struggled to think of a solution to have people see the adult content, w/o necessarily losing. Obviously we increased the game difficulty, but surprisingly, the skill gap in our audience was QUITE wide. We didn't want to unnecessarily punish our worse players but still wanted to reward better ones. This is how Map Scenes came to be.

Our sex minigame also took form due to the direct influence of you guys. Originally, we had a mash to escape system(like we do with Slimegirl Black), and we thought it worked well. The thing was though, unlike pixelart titles our game has a lot to take in when it comes to animation. Since the actual animations are quite large, our fans were lamenting the fact that they couldn't just relax and enjoy the animation at their own pace.

The challenge became how would you have a high pressure minigame, where you can take your time to solve it so you can view the animation.  Our current minigame is our answer to that challenge and we wouldn't have come up with it w/o you.

The takeaway here is that if there's anything you guys don't really like or feel isn't directly explained enough, we'd be happy to communicate and make changes to more suit your needs. The adult scenes withstanding though, as those are kind of spoken for...
Posted by TitanAnteus at 3:35 PM 8 comments:

Our Patreon page is Under Review 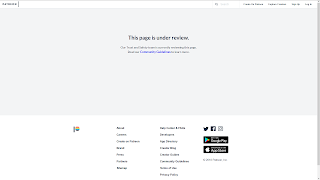 Our Patreon page is currently under review. After reading the community guidelines we realized we were a bit too lax in showing adult content on the page. Our intro page had the Neko Paizuri scene and our intro video had adult scenes shown in it as well. We've changed that and asked for a re-review of our page. We hope it doesn't take too long...

We're sorry for any inconvenience this may cause.
Posted by TitanAnteus at 4:07 PM 12 comments: