Even more progress and background info

The new Beta will be available in a couple of weeks time and it will have 8 new areas, several rooms with unique riddles, PG Daisy and SG Black! It's been a while since we released a new Beta but we were busy designing levels, characters and planning ahead. Let's go through all that bit by bit! 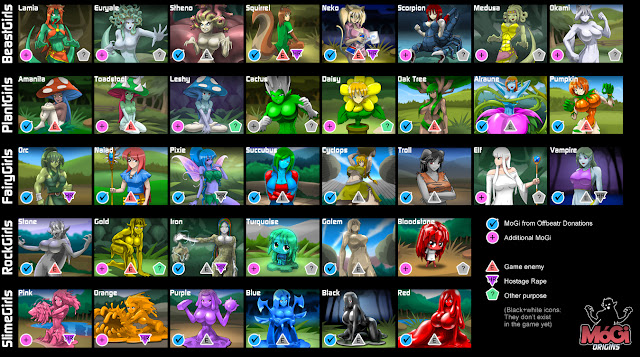 MoGi parade!
This is a comprehensive panel of all the MoGi. You can see which ones appear currently in the game and which ones appear as Hostage Rapes or something else. We decided to include every MoGi in the game, even if their role is not too important or even if they don't have sex scenes. We still have a lot to do, but let's not forget that most of these MoGi were added outside of Offbeatr pledges to make the game look better, deeper, more populated and as a "thank you" to all our fans and supporters!

The map
We had to do a few changes and make sure that everything checks out. We had to print a physical version of the map and lay it on the floor and run every scenario. We can't show the whole map, that would spoil the exploration of the game. The map is complex but essential for the game. A few people might have the problem with the map because of it's unique design.... sometimes the creators need to take risks and try new things. Not many 2D games use a 3D map because things tend to get messy. The only similar map we could find was from "Shantae Risky's Revenge" which wasn't very intuitive in it's use. We hope our map system is less confusing!

New areas
We talked about the "Old Labs" in the comments of our previous post. This area represents the opposite of what you seen so far: ruined buildings instead of clean ones and an upper level of platforming for those comfortable jumping from wall to wall. You can also see Alice and some background info such as the function of each building. The interiors will have many surprises!

Decisions
Roofs and stairs have a fundamental problem, if we got a slope in the game, it has to be a solid object. Voms won't be able to go through it and that can't change because that means changing the core mechanics of the game which can lead to a disaster. So we need to find a way around such problems, discuss, experiment and end up with an acceptable decision. Sometimes you can use your imagination but other times you need to see it in action and judge after you play it for your self.

In a similar manner, we try to decide how the stairs will work. The game has lifts, but they get quite repetitive and we want to change that. We decided that B1 is the best approach to the stair design.

MoGi to come (or... come to MoGi!)
And last but not least, a small animation of how we plan to have SlimeGirl Black attack. A while ago, one of our fans here mentioned "grabs" and we rejected it as an idea. But we never forgot! We talked about it and love the fact that Voms can have his personal HR, while SlimeGirl Black has a sprite sex scene as an attack. SlimeGirl Black turning to ball may not be too sensual, but if she can have a sprite sex scene and an actual sex scene.. might worth the try! This sprite scene might also be the Breast Smoother some other fan asked for!

Regarding non-adult mode the Breast Smoother should be fine as an animation and other playable characters won't be compatible with that move but they will get hit by Black's roll attack. We hope we can pull this off because grabbing moves are hard to implement in a game.
Posted by Veins at 7:47 AM 247 comments: