We haven't said much for over a month, so here's what is happening behind the scenes:

Titan and JR were working on SlimeGirl Red and she is almost ready as a new boss. For that to happen, AD had to complete her level and Veins had to explain all of Red's moves to JR in detail. It was the first major cooperation of 4 people for this game and it was quite a challenge. Red has some problems but Titan is addressing them. Red will be appearing in the next Beta.

Furthermore, we decided to have Voms using the sub-weapons while standing as well (Up+C), so Veins was working on that animation and Titan was working on the remaining of the weapons. AD got married so he couldn't do any additional levels but he will be back in the game soon.

Also we will try to add Alraune in the game as soon as we can, after we are done with Red. Alraune is designed to be quite unique, compared to the rest of the MoGi enemies. 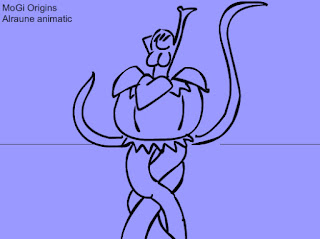