In search of new programmers

Guh.. today I'm in such a bad mood... well I'm in a bad mood for several months now, and I feel the need to vent. I really hate it that we only had 1 beta during 2016. We tried everything we could to make this work but it became obvious that we need programming help. It was hard for Titan to admit that but there is no other way at this point. And that's fine, we make mistakes or we have to bow to real life pressures but we also need to strength to admit it.

I was so angry during xmas that I couldn't even try to write a post here. 2016 was a major waste of time. Actually for the past 2 months I was so depressed that I couldnt find myself to do any new art, waiting for a miracle to happen, hoping that something will change for the best. But nothing did.

So anyway, I knew we couldn't go on like that and I already feel bad for having a Patreon and not delivering anything for months. Titan found a guy to do some of the levels but again, 2 months have passed without any progress. I talked to a few of my online friends (Vortex00, Dorago etc) and suggested to me a few sites where we can hire programmers. They also helped me keep my sanity a little longer. At that time I had zero willpower, plus I was sick for two weeks, delirious from fever. My cousin came from abroad that week and we didnt even had the chance to play MoGi Cardfight!

Well, little by little I tried to force my self to wake up and take action. I posted an ad on some site and we got a few replies from programmers interested in the game. 6 programmers replied to me the last few days and I felt hopeful. But soon after my mood started to spiral downwards once again.

Yesterday, I was talking just fine with 2 of them about the problems they would face and all that. But when they realized that the game has sexual content in it, not only rejected the job (which is fair) but they also blocked me. I'm not a jerk to release their names but that's their Skype messages. Anyways, Guy #1 literally cursed the game it self. Guy#2 kindly rejected the job but he still blocked me in Skype all of a sudden. 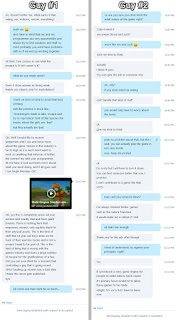 Let's humor Guy#1 who didn't gave me the chance to explain myself. Let's see what Sexism means:
1. Discrimination based on gender, especially discrimination against women.

2. The belief that one gender is superior to the other, especially that men are superior to women.
also, "relating to or characterized by prejudice, stereotyping, or discrimination, typically against women, on the basis of sex."

I really dont think those things apply to MoGi Origins. I don't see any discrimination apart from the fact that the MoGi are not human. Also, they force men to have sex with them, which makes them superior to men. Once you play the game it becomes clear that the MoGi attack first and Voms has to defend himself in order to save the island. If you look at the NPCs, both women and men wear same outfits and they all appear to be pretty normal. If that's not gender equality, I don't know what is! Guy#1 said he doesn't mind sex, violence and even racism. And then changes his mind and blocks me. Well if he doesn't mind racism then I should be the one to block him in the first place!

In any case, we got a few more proposals. One guy seems to be good and he is fine with sexual content but he is too expensive and the other guy... well we implied to him that we are making a +18 rated game but I haven't really told him that it's a hentai game. At this point I don't know if I should lie about it... These programmers would just do the levels, without any H-images involved. I don't want to lie but I want the job done! My head hurts dealing with all that... why life isn't any easier?

A true professional would do the job even if he dislikes the content, because that's what the definition of doing a job. Like the 12th definition of Urban Dictionary says: Job - Something I have to do to pay my bills, but seems impossible to do without some horrible physical or emotional consequence.