Team Erogi took a break during February but now we are back, refreshed and recharged. We needed some time away from the game, not only to rest but also to distance ourselves a bit, in order to see the game with fresh eyes upon our return.

There's quite a lot of fine-toothed things that our team needs to work on:

• All the normal monster enemies are programmed and their sprites are fully animated. We can't however tell which MoGi allies they synergize with and which they don't, so we do need to tweak them until they feel satisfying to fight against. (For example, Rockgirl Stone used to just be immortal to attacks until she left herself open when she attacks. If you paired her with any other Mogi like Neko for instance, it didn't feel satisfying to wait for her to attack before hitting her back. After testing and discussing about her, we decided that she needs to have higher defense when she blocked, instead of being immortal.) 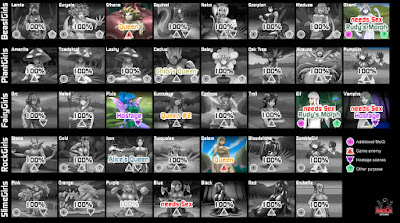 • Titan's making sure the specific Keys to certain puzzles are unique. (Everything the user interacts with, modifies the savefile. We need to be extra careful about this because the gamemaker's ID system reuses IDs after some time, and this can create programing conflicts. This is the main reason why people need to restart the game from start in every beta update. And since we are planning to add more content after we finish and release Voms, that system needs to be made to take updates.)

• Last but not least, Titan's making sure the final boss for Voms, feels right to play against. (She'll make you use all of your abilities and should give a very challenging fight. A lot of this work isn't directly visible, but we are working towards at least one more beta before a Voms game release.)