Patreon goal
After a big bumpy ride, it's time for some good news. We reached our 3rd goal on Patreon thanks to our patrons and their patience. This means is that MoGi Origins will have a new Hostage Rape soon!

"Hostage Rape"? That sounds bad right? Don't worry, it's not that bad. In case you don't know or you forgot, Hostage Rapes occur in the game when a sexy monstergirl dominates a poor male citizen for sex. Anyone who supports Team Erogi on Patreon with $5 or more, not only gets the latest beta of MoGi Origins but can also vote for one of the following MoGi! The poll closes on April 10. 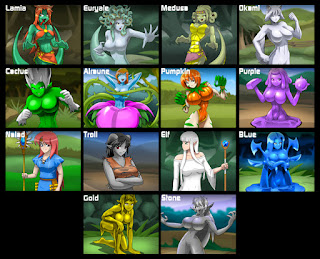 New Programmers
Veins was scouting for two and a half months for new programmers, since Titan is occupied with real life matters and he is unable to work on the game's development. After a long and exhausting search, we found AD who's tiling levels for about 2 weeks now (he made 4 levels so far) and JR who will be involved with the core programming. Titan will still be around providing help and insights and hopefully the project won't be stalled any longer.

Rejected co-workers
In our research for programmers, we came in contact with people who are frauds or incompetent. Hiring a freelancer is risky and some people should be punished, not only because they steal money, but also because others may lose their trust on freelancing or other online activities. We decided to not make public the personal info of the "bad programmers" involved, because we just want to move forward and leave this behind. Other than exposing these people, we want to describe the mess behind the scenes, justify the development time we lost and prove that we never stopped trying to make things work. So, here's a summery of what happened since February:

Bad programmer #1: We found a programmer who seemed competent at first, but as soon as finances got involved we saw his true colors. He just left a week later. It seems others have been duped by him as well and his freelancer profile is now gone.
Bad programmer #2 (company): A seemingly serious company wanted to take over MoGi Origins. However, they were generally incompetent and couldn't finish what Titan could do in 1 day in nearly 3 weeks. After many excuses and absurdities they ended up delivering absolutely nothing.

Escaping the darkness
After all this mess things start looking bright once more. We will try to release a new beta in the next few days. That beta will include the 2 Chibi MoGi and Voms' sub-weapons. Hopefully the updates will be more frequent from now on. We aim for a new beta release per month if everything goes well. Thank you all for your support and patience during our darkest times.