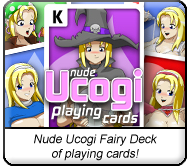 Ucogi started a Facebook page and due to popular demand her Nude Fairy Deck is released!
If you want to check all Ucogi and MoGi card games, visit Ucogi.com


Regarding MoGi Origins, we had to overcome many obstacles, from personal issues to game-making challenges. If you need to know more, here it goes!

As we added more and more resources (tilesets, animations, audio) a few internet users were having trouble. We originally thought it was just that their PCs didn't handle memory well. Recently though after finishing a hostage rape animation we've seen this trouble on one of our computers. We decided to make a change to the framework of the game in order to fix this. This framework change is almost complete.

The next beta version of MoGi Origins will be released soon. As you see, the momentum this game has gained thanks to all of you can't be stopped! The next Beta release will have a new MoGi enemy with a highly unusual and innovative sex scene and a new Hostage Rape. Here's a glimpse of what to expect!