With the death of Adobe Flash, most, if not all of Ucogi's games stopped working in any internet browser. A friend of mine is working on a "wrapper", that would be able to run the game's I made over the years. That said, Ucogi games will have to adapt, or seize to exist. So, I had to think and work to preserve Ucogi's legacy.

I revisited my itch.io account in hopes to uploading and promoting my games. I'm uploading both .swf and .exe files (hopefully the .exe files will keep working in all computers). These games are given at a minimal cost and people who supports us on Patreon receive these games for free.

This month is a special one. It's the 10th anniversary of Ucogi's first Flash game, "Saint Patrick's Day"! That inspired me to revisit and upload the final version of the game here. But that's not all. As part or Ucogi Legacy, I started exporting Ucogi's original art in the biggest resolution possible! This is awesome not only for posters, but for any kind of merchandise! Depending how it goes I may to the same for more of Ucogi's art, but for now I welcome you to Ucogi's Saint Patrick's Store! 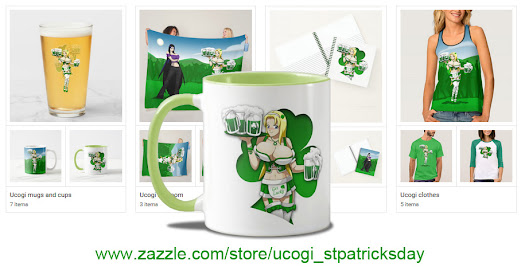 Just like in my itch.io page, most products are given at a minimal cost ($1 above their original price), plus you can get discount passwords and even customize the merch to your liking!
Regarding MoGi Origins, I'm happy to announce that I finished SlimeGirl Blue, which means that all of the normal MoGi in Voms' timeline are completed! The Queens are not far off either, as only Stheno remains to be done from the bosses. 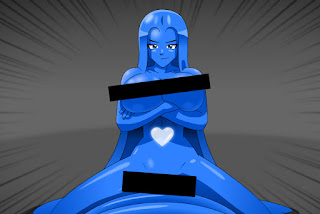 Furthermore, Titan has finished Rudy and her transformations. Rudy has access to very specific places in the map, due to her various platforming abilities, so now we will be able to finalize the levels! Also, we finished three new and original music pieces for the game!