This month had a lot of ups and downs.

The ups:
Veins made a lot of progress on many secondary things on the art department. 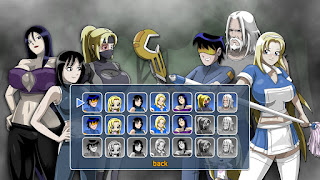 - Additional menu buttons and layout.
- New NPCs (so that new players get better instructions regarding the first alley at the Docks, the farm fire, the farm key and also for a new e-weapon tutorial at the Docks.
- Environmental animations, such as seagulls, updated smoke and water reflections so that the game feels more alive.
- Animations for new interactive items such as the ENP station (gives 1ENP if you have none), wooden box explosion, ENP charger (Voms needs to shoot energy as the charger to activate a machine), machine that starts the fire in the Oak fight, and Grabbots (which are double platforms to replace the Waterbots which are single platforms).
- Plans for the upcoming levels and character interactions such as Vor and Alice's story.
- Additional level art (water tanks, water towers etc.)
- Working slowly on Alraune's HR and MoGi animations.
- The Succubus designs are almost done after talking to the guy who pledged for her.

The music guys also did a lot of good work. We have ended up having 3 music guys and 7 new tracks that will be added as new levels are made.

The downs:
No new levels yet. AD finished the Communications Tower exterior but the interior took him over 2 months and it's still incomplete. NR still works on the lever after Slime Girl Red (he got overwhelmed by real life situations).

Titan and Veins are having family/medical problems but they still try to do their best. Veins' mom is in the hospital... he cant animate MoGi at the moment (animation needs a lot of time and concentration) but he still works on some secondary game designs (see above) and various details while being there.