August has really been a month of retrospection.

We've had a lot of new people come and play the game and give feedback to the point that we felt we needed to step back and look at our past decisions to make sure we're happy with them as well as our workflow.

Thank you everyone for being so supportive in those messages and so constructive. We really appreciate it.

We started with the main menu. 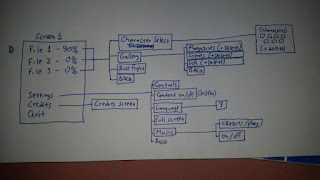 We've been asked about multiple savefiles before, and with future developments we have planned, we do plan on implementing this. The thing is, in the game right now, you can always go back. There's always a way to go all the way back to the beginning of the game. That means when people miss things they miss them completely. The range at which you have to traverse to handle puzzles also becomes vague and if we want to lock the players forward for a small amount of time we can't. Multiple saves should alleviate those concerns.

Visually we're working on the parallax of the backgrounds to be more noticeable. It's there but hardly noticeable right now. If you've been following us for a while you might've also noticed various resources being changed like the sprinklers early on in the game. Also, we now have a new guy working on the game building of the game (2 in total) and we are 1 level away from starting on the game's 4th quadrant.

Another big thing that's been really bothering us has been music.  Our game has no strong audio identity nor variety to say the least. We've been going around gathering more tracks for the game to give each area more of a presence. Veins talked to over 60 guys the past 2 months and he found 4 that already made 5 new tracks.

Regarding the gameplay, I'm too afraid to make too many difficulty tweaks. As a developer the game is super easy for me and the variance in player skill is extremely wide. I honestly don't know what values to really modify to make the game harder or easier for everyone. I was thinking of just giving Voms less health on harder difficulties and have the MoGi attack more aggressively or have more health, but finding the balance of values proves to be more of a challenge then I expected.

Logistically getting all this work done has been our aim as well as getting more MoGi into the game. When it comes to general eroticism our MoGi are special in how you handle them. They're mostly nude so the eroticism has to come out in the animation. It's nothing too big, but we've always been conscious of the lady jiggles. We hope you like the new MoGi when she's released.

Thank you for your constant support.
Posted by TitanAnteus at 7:56 PM