During August I finished the sprite animations of SlimeGirl Blue. At 186, she has the most frames than any other MoGi, more than double compared to most other enemies! Blue is very versatile: she can throw projectiles, hurt Voms if he tries to touch her, walk on ceilings and drop on Voms if he tries to walk beneath her! I recorded the entire animation process for all our Patreon supporters.

There is a re-skin to be done for Blue, Erubetie from MonsterGirl Quest! I will take the liberty to make Erubetie different to Blue, for enemy variation and to avoid any confusion. 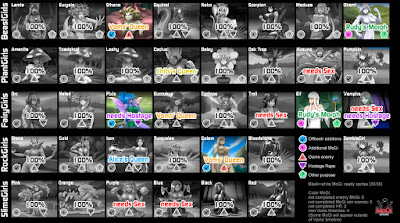 There are still a few Queens, extra MoGi, Hostage scenes and sex scenes to be made, but Blue is the last of the normal MoGi enemies that I had to do for the game! Many of the MoGi in the list are not in the game yet, but they will be added as soon as Titan has free time to work more in the game. I will work non-stop on the sex scenes once I'm done with everything else, so that Titan won't waste any time working on the game once he arrives at my place at the end of October. Sex scenes are easy to add, but the rest need special work to be implemented, so I need to focus on the actual game for as long as I can.