Summer, heat, people visit... it wasnt a productive month for me. Not as much as I wanted anyways. I haven't been on vacations for over a year and this slows me down. In any case, I try to keep my chin up and work with as much enthusiasm as I possibly can.

This month I finished Golems animations. Golem is one of Voms final bosses and although she doesn't have much of a story, I hope in the end she can add something new to the table. Voms cannot beat her, but another character can hopefully put up a fight against her. I do like the idea that Voms won't be able to do everything on his own and the other playable characters will be around to assist him in their own timelines. She is one of the 3 giant Queens, along with Cyclops and Stheno. 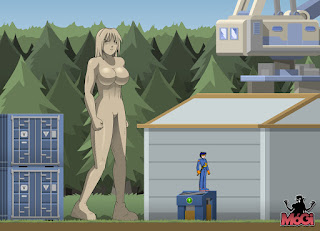 Titan was super busy during July, but he told me a few days ago that he has worked on the levels. Almost all of them are linked but he still needs to set their riddles, hazards and mechanics. There are a lot of these additions that we haven't been able to share, so perhaps it's time to show some of them.

This is one of the many new rooms with new mechanics and animations. Voms will be able to climb on moving platforms and try to avoid toxic clouds, exploding pipes and goo eruptions, as the Chemistry Lab is falling apart! There are 3 Labs that form a big riddle and Voms has to solve it in order to proceed with his adventure. Like the City and the Tower, the Labs serve as a break from the horizontal platforming and enemy fighting, to focus a bit more on the puzzle elements of the game.
Posted by Veins at 3:13 PM