I got a bunch of good news:

Titan will visit Veins for 2 months, around January. Until then, we won't release any Betas, to focus on work and also because we are too close to finishing the game.

Due to life problems, Titan hasn't been working on the game as much as we would like to and we need to go pass the development hell phase by any mean necessary. I certainly don't want to have this project on hold for another year.

His 2 month stay doesn't leave any room for errors but it's the best thing we can do. These 8 weeks need to be treated surgically. 2 weeks to finish Voms timeline and double check all his maps/riddles. Then 1 week to finish the riddles, story, dialogues and bosses for each of the 6 other playable characters. And of course something always goes wrong, so we need to be prepared for anything. This sounds like a close call but we have to remain positive as Titan works really fast and efficiently under the right conditions.

That said, we might need to sacrifice some luxurious choices we announced early in development, such as several save slots and Vor's prequel level, to try and ensure as much quality as possible for the main game. Vor's story however, will be told even as a cut scene, if necessary.

Regarding current progress, two more Mogi sex scenes are done (Golem and Succubus 2). The game is getting closer to the finish line. 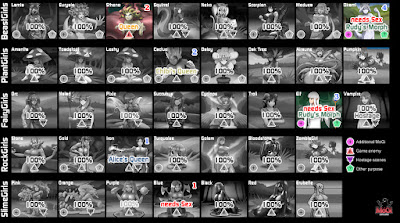