I'm happy to announce that we are a few steps closer towards the completion of the game. Quite a lot of progress was done during August. Titan was working on the Time Attack and Survival modes of the game, and I finished animation the sprites for Okami and Elf, which are going to be transformations for Rudy. You can see both making-of videos in my YouTube channel.

For those who don't remember, back when we started the game, there was a suggestion, to have the option to play the game as MoGi. This is what we came up with, having Rudy morphing into several MoGi, each with a different power and attack, in order to avoid various obstacles. It was a challenge and we hope our efforts are well received! Okami and Elf are 2 of the 3 Rudy transformations. The 3rd is Gold and when she was done, we decided to add her in the game as an extra MoGi enemy. That though, won't happen with Okami and Elf. We would love to include them of course, but it would take a lot of time to program them as enemies and give them sex scenes. We need to focus on finishing the game, rather than adding extra content at this point. 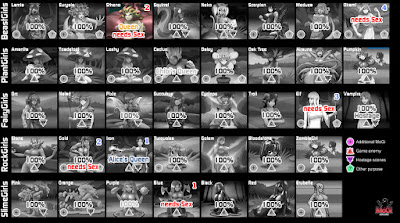 Thankfully, not many things are left to be done in the game. Apart from Stheno and 2 adult scenes for Voms, the rest is just 3 adult scenes for Rudy, and a couple of bosses. Then, Voms and probably Rudy's playthrough would be done and the playtesting and polishing should begin.

The next thing I need to work on, is Stheno, Ucogi and Alice. Ucogi and Alice's playthroughs are not a priority right now, but they do appear as characters in Voms' timeline and I need to animate them soon. I was waiting a long time for this and I'm hyped!