Hyped by the progress!

Ever since Titan went to stay with Veins for the second time, we've been working like madmen on Mogi Origins.

There are about 150 rooms in MoGi Origins and various aspects of those rooms need to be reviewed. We've been sitting next to each other reviewing each level, going through each minute detail as we attempt to finalize them. In some severe cases we have to re-do huge parts of a level. Here is an example of a  level that took about 5 hours to be completely revamped and you can watch the progress in the sped up video. 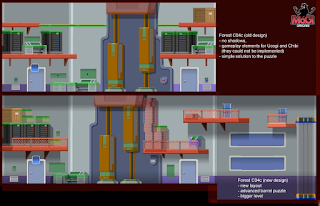 Veins has been thoroughly enjoying this process as he's a more detail orientated person. He's been able to add tons of new shading to the game so it feels less flat, while making older levels more consistent with the visual quality of some of the new ones.

Here are a few more example of level editing, tiling, coding and object placement. We managed to cover 2 room in 8 hours in this video. Spoilers for some of the later levels.

Currently we are just focusing on Voms and getting him out the door. Technically, you can walk around the entire game world in our development version and that's quite a large accomplishment.

Speaking of the other characters... Since Voms will encounter them, Veins has been working on animating them. Progress on that front has been good. We managed to make 2 more videos regarding art and testing the Ai of enemies. In these videos you will also get a glimpse of a half-finished naked Ucogi, so have fun!

Thank you so much for the constant support and positive thoughts!
Posted by TitanAnteus at 5:39 PM