After 2.5 months of hard work, Titan returned home and he is no longer living with Veins. Our main goal was to finish Voms timeline, or at least, as many things as possible. We had a board for our plans and deadlines (1) and another board keeping track of what actually happened (2). 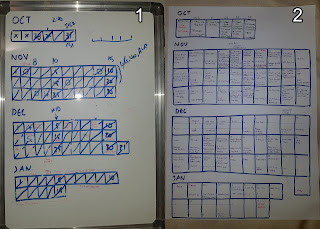 You may not understand a lot because those boards were made for personal use. But you can see some of the dates we took a break, the weeks that Veins planned to finish Ucogi and Alice but he had to deal with the level design instead, and the final days where we both were exhausted. The map system was done from scratch, a few errors and glitched had to be fixed, a ton of level hazards were added and the list goes on and on regarding everything we added in the game.

We reached a point were we had to work so fast that we didn't even had the luxury of turning back and double check our work. We finished all the MoGi enemies, program-wise and graphic-wise (except Erubetie), as well as many MoGi Queens, but there was no time to test them excruciatingly. Our level guys managed to finish all the 59 remaining levels but we haven't played in them in order to do any corrections. Designing all these levels and adding all the new objects took a huge chunk of Veins time, and they have still a long way to go, but knowing they are almost done, it's a fulfilling milestone.


Most of the work is done but we need to check what we have done in detail before we can show something concrete. We do want to release a new Beta soon, but first we need to go through the time consuming process of finalizing everything we can, which always slows us down a bit.

Now that Titan and Veins are separate again, Team Erogi will be working to tidy up the game and make it ready for presentation. Unfortunately we didn't get to finish Voms timeline, mostly because Ucogi, Alice and a few cutscenes and MoGi need to be completed as well. That said, we did a REALLY good amount of work. The entire island is done visually, and every map exists in the level editor. This was a really large hurdle for us, and it's cleared.

Posted by TitanAnteus at 9:15 PM